On December 11, 2020, long-time Colorado Chapter ARCS’ advocate Laura Shepard Churchley continued her family’s legacy of creating history in space. As she climbed aboard Blue Origin’s “New Shepard” rocket, she, and her father before her, became the first father and daughter to experience space flight.  Blue Origin named the rocket in honor of her famous father, Alan Shepard, who in 1961 was the first American in space, and in 1971 was the fifth man to walk on the moon.

The “New Shepard” lifted off from Blue Origin’s launch facility in Van Horn Texas just after 10 AM on December 11 after a nerve-wracking two-day weather delay. Riding inside the crew capsule on top of the New Shepard rocket was a six-person crew of Blue Origin guests and paying passengers. The rocket climbed to an altitude of 351,225 feet, more than 66 miles above the earth, offering a few minutes of weightlessness above the boundary to space.  The capsule carrying the crew touched down on the Texas desert floor while the “New Shepard” booster successfully landed upright on a landing pad. The New Shepard is a fully reusable suborbital rocket system designed to take astronauts and research payloads to space.

Since her father’s famous flights Laura has presented hundreds of lectures and programs for school and civic organizations often wearing his flight suit. She now has her own chapter to add to her programs and a much better fitting flight suit. 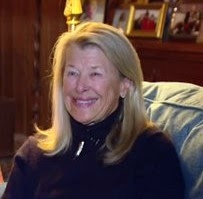